After a lovely breakfast at the hotel, we hitched back up the trailer and headed for Yellowstone. Going through the Absaroka mountains, we hit heavy rain followed by hail best described as somewhat bigger than a pea but smaller than a marble. Those on the road who didn’t pull over slowed down to 25 mph. We followed in the wake of a large trailer truck that helpfully displaced all the water from the road ahead of us.

After turning towards Yellowstone, the sun came out again and all seemed right with the world. This turned out to be a theme for a stay. Rain, thunder, hail followed by warm sunshine. When we managed to get any sort of data connection, the forecasts we pulled down were always either wrong or quickly out of date and totally useless. 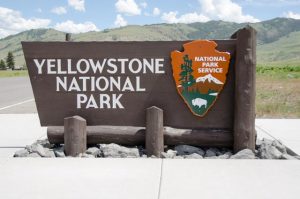 We had a reservation at the Canyon campground in the middle of the park. When reading reviews of the campground, I found a lot complaining about how big and busy it was, but that it was in a great location since it’s really in the middle of all the main attractions. So I had braced myself for a somewhat unpleasant campground, but the opposite turned out to be true.

No one camps at Yellowstone “to go camping.” Everyone is here to see all the sites, which are definitely not in the campground. Maybe we lucked out, but everyone at sites around ours arrived late, left early, and were very quiet and inconspicuous in the meantime. Maybe after those days of RV camping, my tolerance for what is considered noisy and crowded is somewhat high. In any case, I highly recommend it for anyone considering a stay at Yellowstone. You still have to drive a lot to get anywhere, but the amount you’ll have to drive is fairly constant and not horrible for day trips.

Anyway, it took about an hour once we entered Yellowstone to arrive at Canyon campground. The journey is full of pot holes, curvy roads, and at least one hairpin turn. But it is also beautiful with rivers and mountains and green fields. And bison. And bears. And lots and lots of fellow tourists who will stop on the road at any hint of said animals.

In our first example of this, we saw a bison on one side of the road and two black bears off in the distance on the other side. Since there wasn’t any room on the side of the road to pull over, people were just stopping to take pictures from their vehicles. Since we were stopped anyway, I got a somewhat hazy picture of the bison through our side van window, but I was able to lower my window to get a less-hazy distance photo of the bears. I’m not going to win any awards, but it was pretty cool to see these animals so close and so soon after entering the park. 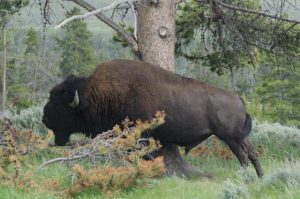 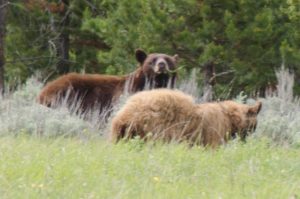 After we arrived at the campground, we unhitched the trailer and set up the tents. We made sure to put up both EZ-ups: one over our kitchen area and one over the kids’ tents. This turned out to be a very good thing since it pretty much started raining immediately after we arrived at camp. All that rain that we managed to avoid in Glacier hit us full force at Yellowstone. But all our wet weather camping in Oregon prepared us well, so it was more of an inconvenience than anything else.