June 30, 2018. On travel days, we normally don’t have time to do much more than drive, get fast food for lunch inside the van, and unpack when we arrive at the campsite. But Canyonlands is only a couple of hours from Arches, and the Arches campground has a 10am checkout time. Unfortunately, that had us arriving right at the beginning of the hottest time of the day. 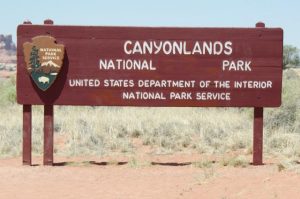 Canyonlands is a huge national park, but it’s separated into three pieces by geographical features that make travel between these regions impossible by car unless you drive out of the park and around. We stayed in the Needles region, which isn’t as popular as the Island in the Sky, which is closer to Arches, but it’s not as remote as The Maze, which doesn’t have any established campgrounds. The campground in the Needles is reservable, which is a big reason why I picked it. First-come-first-serve campsites are too stressful when traveling with three kids.

Our campsite in the Needles was great. It was huge, partially shaded, and had a gorgeous view. Although we had neighbors on either side of us, the site was large enough and situated so that they weren’t visible at all to us. It was basically the five of us alone in the middle of the Utah desert. 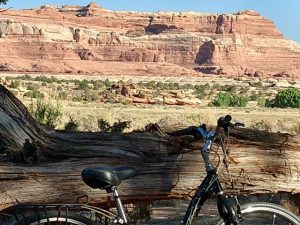 There was a downside, however. The nearest bathroom was a pit toilet that was at least a quarter mile away. The nearest bathroom with running water was 0.4 miles away (I checked on the van’s odometer). We used the bikes to go back and forth from the bathroom, and we used the van to drive there to drop off our grey water after doing the dishes since walking a quarter mile with a sloshing shallow container of gross water is not my idea of fun.

After we set up camp, we drove back to the visitor’s center. The kids picked up their Jr Ranger workbooks, and I asked the ranger for recommendations on hikes and things to do in the heat. Unfortunately, there wasn’t a whole lot. We got a couple of recommendations for hikes to do the next morning, and we found out where the local camp store was, but there weren’t any nice long scenic drives to take in the area where we could have stayed in the cool AC of the van that afternoon.

There was, however, a shorter drive of a couple of miles with an area at the end with some pretty spectacular rock formations. So we took it and I popped out to grab some pictures while the rest of the family stayed in the car. 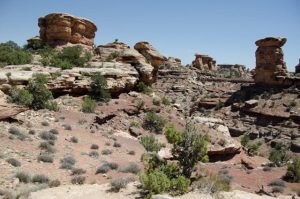 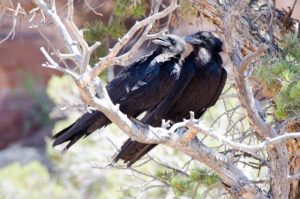 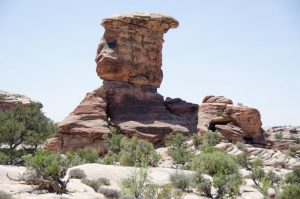 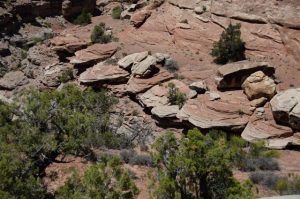 Afterwards, we decided to check out the local camp store and see what sorts of things that they had. It was located just outside of the national park and basically consisted of a couple of trailers. They have showers there but no laundry. All their water has to be trucked in since they are completely off the grid, and the nearest town in a 45 minute drive away. You could also apparently buy internet access from them, although we didn’t try it out. It was super rustic and charming and low key and definitely appealed to the hardcore backpacking crowd. They also offered the kids free otter pops every time we went there. Super nice people, although their selection of food was pretty awful. Lots of really overpriced junk food and processed stuff that stores well.

We didn’t actually need anything from there and had mostly gone to kill time during the afternoon heat, so we went back to the campsite and hung out the rest of the day in the shade. 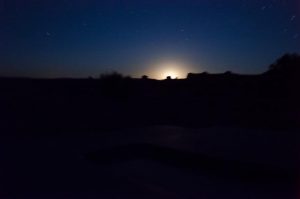 Canyonlands is located in one of the most remote places in the US. The closest town was, as I mentioned before, a 45 minute drive. The bathrooms, even the one with flush toilets, don’t have any lights. Our neighbors, although allegedly existed, were not visible from our campsite, nor were any lights that they might have had. So basically this probably the darkest corner of the planet that I’d ever visited before. Unfortunately, we were also there during a full moon (or close to it anyway), but there was about an hour between the sun setting and the moon rising when the skies were absolutely blazing with starlight.

I had downloaded an app on my phone that allows you to point up at the sky and learn what constellation you were looking at. It was a bit difficult to see, however, because the app assumes that you can’t see as many stars as we could see. It was an amazing light show and worthy of the trip in and of itself. My only regret is that we didn’t somehow manage to spend more time there on a moonless night. Next time!!

My clearest memory was looking off on the horizon and spotting a strange light. At first, I thought that maybe it was the visitor’s center that we had gone to earlier in the day. But the visitor’s center is farther away and not in that direction. It was clearly not a star; its light was more golden with a hint of orange. Then we thought that maybe it was an airplane flying directly at us, explaining why it was rising in the sky instead of going across it. But eventually it occurred to us (and confirmed with my app) that it was the planet Mars.

Of course, I’d seen Mars before in the sky, but it always just looks like a bright star to me. It’s supposed to be reddish, and maybe it was if I squinted enough and knew what I was looking for, but it never seemed all the different than the other faint lights in the sky making up the rest of the stars and planets. But that night in Canyonlands, it was super clear that Mars was nothing like a star. And its color was unique and different than any other object in the sky. The Milky Way is, of course, spectacular, but Mars is what I will always remember about the night skies in Canyonlands.