After our battery incident with the van in Glacier, Aaron decided to invest in a solar trickle charger. Rather than try to find one at a local spot while driving through, we decided to order one through Amazon while we were briefly in cell phone range while we were in Moose in Grand Teton park. Salt Lake City had a locker at a 7-11 where we could pick it up.

After stopping at a Walmart near Box Elder to pick up some supplies (easy place to park the trailer!), we went into Salt Lake, which was on our way anyway. It turned out to be hard to make a left turn into the parking lot, so we had to make a little detour for a better position getting into the lot. In the process, we went down a side street with large speed bumps. Bump! Bump! Ooops… after one of the bumps, we noticed our A/C stopped working. Then we noticed our engine temperature was MUCH higher than it was supposed to be.

After getting to the Sev, we stayed in the parking lot for a bit, hoping to cool things down, but that only made things worse. It was too hot to check oil or water levels, so we continued on cautiously. After a bit, the engine temperature went down again and all seemed well. We started thinking that there was an oil leek causing the problem. (Later on we discovered it was actually a faulty relay that was preventing our engine fan from turning on and off properly.)

In any case, we continued onto Arches without any other issues, and the engine temperature remained normal. We had a late start and weren’t scheduled to get in until after 9pm, but then we relied on Google too much. When Aaron turned off the main highway to take the smaller road to Arches, we instead discovered a dirt road. This definitely did not look like the right way. It turned out that Aaron had put “Devil’s Garden” into Google Maps instead of “Devil’s Garden Campground,” and this made a large enough difference to put our navigation off by a bit. Ooops! We backtracked and found the correct exit about 15 minutes behind us. Add in another rest stop break and we got into Arches at around 10pm, way later than we’d have liked, but at least we made it in one piece. 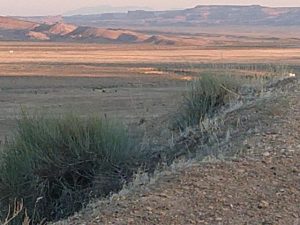 This was a view from a rest stop about an hour out of Arches. Beautiful country!