Friday night, it rained. It rained and rained and rained. And then it rained some more. I’m pretty sure there was also some hail mixed into it all. We were very grateful for our snug trailer. The kids also survived the night in their tent covered with an EZ up. Aaron had picked a good place for the tent, and it avoided the puddles that formed in other parts of the site. But it was very, very wet and cold.

We had heard that the place to see wildlife in Yellowstone was in a section of the park called Lamar Valley and that the best time to see them was before 9am or after 6pm. Since Lamar Valley was about 90 minutes from our campground, we woke up really early (Des and Auggie stayed in their PJs) and took off before 7. The nice thing about being out and about at that hour? There weren’t many people around.

So we got to pull over and enjoy the overlooks such as this one. Looks fake, right? 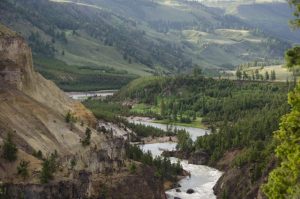 I also really like their “don’t fall over the cliff, stupid” signs. 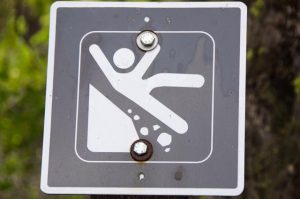 See if you can spot the three bison in this photo. There were a lot of herds of them in Lamar Valley, but most of them you need some pretty strong binoculars to see. 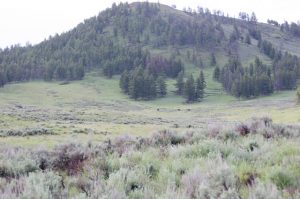 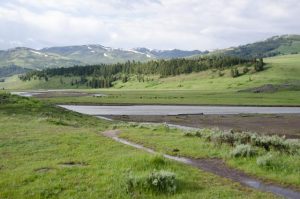 As we were watching another large herd in the distance through some binoculars, we noticed some other smaller animals mixed in with the bison. They were much lighter in color and ran around as quickly and agility as rabbits. I almost thought they were wolves at one point except that the bison were utterly unconcerned, and then I thought I glimpsed horns and long legs (the binoculars were not very high powered). Meanwhile, this guy snuck up on us. This is a closeup; he wasn’t actually this close to us, but still much more identifiable. Consulting our list of common Yellowstone animals, we figured out he was a Pronghorn Antelope. 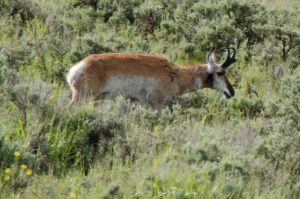 We continued onto the end of the valley. There was a picnic stop at the end that we planned on using to have a bit of breakfast, but then we reconsidered when we saw how wet and cold it was. It was a lovely site next to a river, but just not very comfortable at that moment. So we turned around and went back through the valley. 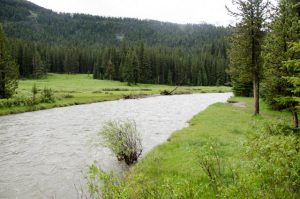 We stopped at a pullover where there were a crowd of people staring at this cliff for big horned sheep with powerful lenses. Some of them were also looking at the other side at this river where they said they could see some antelope. I wasn’t able to see either; just some people walking further down into the river bed, looking for more animals. So we got back into the van and continued on our journey. 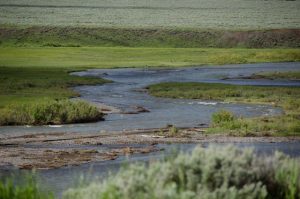 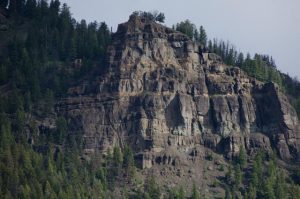 Next, we ran into another herd of bison that were holding up traffic by standing in the middle of the road. These two were just a car length ahead of us to the side of the road. 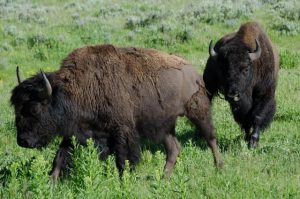 This picture was taken out our front windshield. The bison just stood in the middle of the street for a while, completely unconcerned with all the cars around him or the traffic he was holding up. 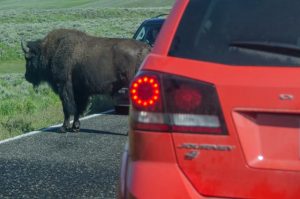 Afterwards, we drove back to our campgroud for some breakfast and, at least for me, a bit of a nap. It had been an early morning.

After a bit of a rest, we headed down to the visitors’ center so that Gigi could get her Jr Rangers book stamped. We looked at the exhibits for a little bit and then got back in the car (Yellowstone involves a LOT of driving) and drove down the road to the Grand Canyon of Yellowstone, the place that our campground was named after. Wow. I’m not really sure what I was expecting, but this was beautiful. 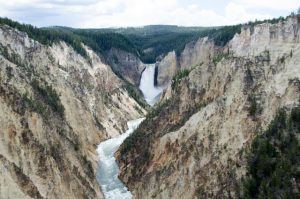 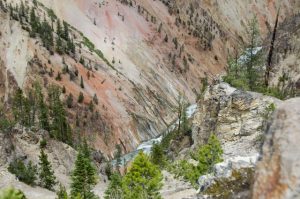 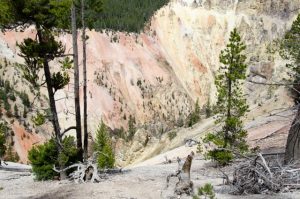 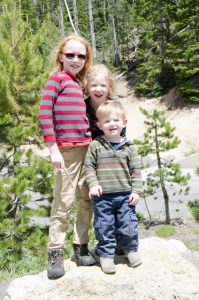 If we didn’t have a clumsy two year old with us, I would have loved to have hiked further along the canyon and explore all the different colors and textures in the canyon. But steep cliffs and a kid who doesn’t always stay close to us and isn’t old enough to have good safety judgements isn’t a great combination so we reluctantly left. And that was pretty much the end of our great Grand Canyon adventures. I would love to come back later when the kids are older and we can do some longer hikes.

One thought on “Lamar Valley and Grand Canyon”