On our first full day at Yellowstone, we headed west and south from Canyon towards the Yellowstone supervolcano caldera. Our first stop was Artists’ Paintpots. The parking lot was a zoo, and we spent a lot of time waiting for the cars ahead of us who were waiting for someone to slowly pull out of their parking spot. The lane was narrow and one-way, so there was no passing someone who stopped. We lucked into a parking spot and started on the 1-mile Artists’ Paintpots loop. 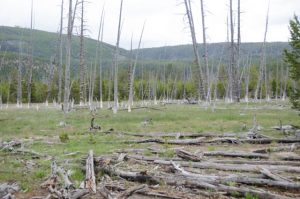 At first, it was really pretty, but pretty normal foresty stuff that mostly consisted of remnants of a long ago forest fire with green new growth replacing it. And then we hit the first hot bubbling greenish-yellowish muddy spring with a geyser spouting off behind it. We were suddenly not in a normal forest anymore. 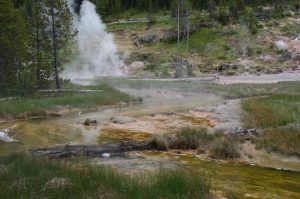 The path winds around the creek and up some stairs until eventually we had a view of the entire basin area and its totally bizarro alien surface. And yet, if you were to look the other way, you’d see that we were still, in fact, on Planet Earth, and there was still plenty of normal foresty stuff around us. It was just mixed up with all this excess energy bubbling up from the ground. The colors were beautiful and mixes of oranges and reds and blues and greens. 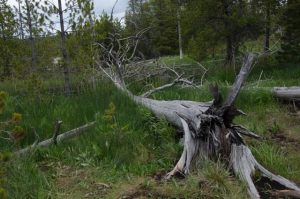 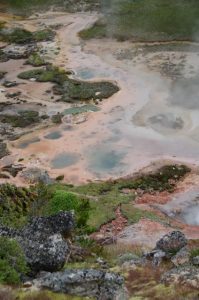 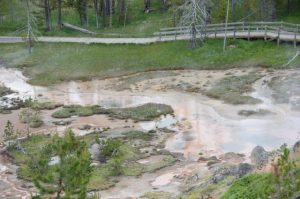 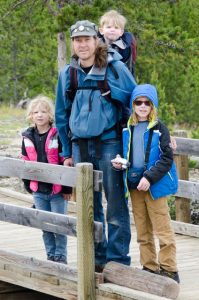 There was even a big spot full of white-grey bubbling mud that was really hard to photograph. The second shot shows the white-grey stuff and how it looks like it has just been dropped in the middle of this beautiful evergreen forest. 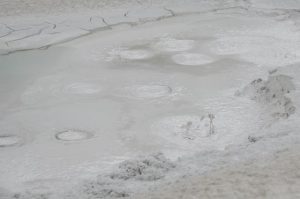 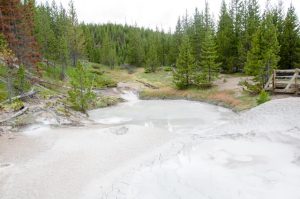 They built a boardwalk through most of this area since walking on the ground would not be a very good idea. 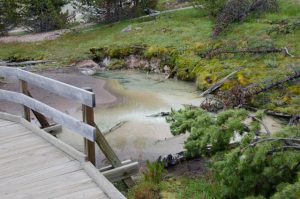 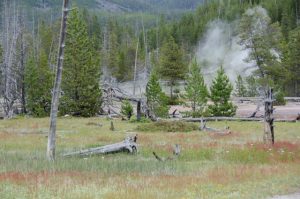 The next stop was just 5 or 10 minutes down the road from Artists’ Paintpots. Beryl Spring was name for its beautiful blue-green color. Super pretty. It basically looks like a giant natural hot tub. But one that would almost burn your skin off and be toxic to your health. 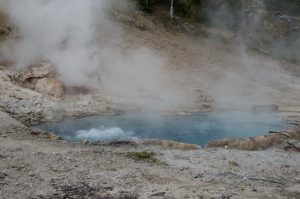 The next stop was Gibbons Falls, which marks the edge of the supervolcano caldera (from its last major eruption 640,000 years ago). Auggie had a lot of fun walking on the stones that lined the path and going up and down the stairs. Gigi and Des raced ahead to the end, meeting me as they were coming back from the end. “When can we go? Where’s Auggie? What’s a caldera?” 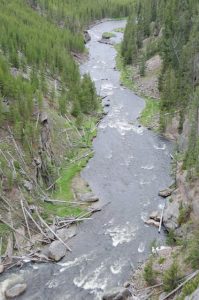 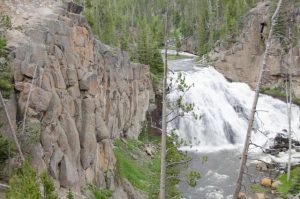 So I got out the Yellowstone map and showed Gigi where the caldera was supposed to be, covering about a quarter of the park. She asked me all kinds of questions about volcanos and craters and wanted to know why she couldn’t actually see the Yellowstone caldera. So many questions that I could only blindly repeat to her the answers that I had read. Yellowstone is still a pretty big mystery, even to experts, and my answers were less than satisfactory.

The kids were starting to get hungry at this point, and Auggie was getting grumpy and in need of a nap, so we decided to skip the next couple of stops and go straight to Old Faithful, which was as far south as we planned on going that day. As expected, Auggie fell asleep in the car on the way there, so he and Des stayed with Aaron in the car while Gigi and I went on an expedition for some lunch. We went into the HUGE gift shop, skirted the edge inside and went to the back where they had a small selection of cold, soggy, way overpriced sandwiches. But they would have to do, so I exercised my credit card and we took our dubious bounty back to the van.

Auggie was still sleeping after I finished my sandwich, so I left the family there while I went and scoped out the area. Although we had found the gift shop, the whole Old Faithful complex is so huge, that it’s not immediately obvious where exactly Old Faithful itself is. I eventually found it and, after overhearing some people talking, discovered that it was scheduled to go off in 15 minutes. 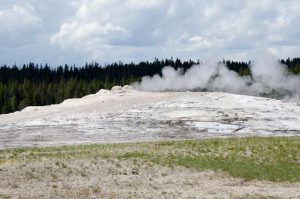 There was just enough of a phone connection that I could text Aaron the location and to wake Auggie up and join up with me. He texted back that he was on his way. And then I waited and waited and waiting. Old Faithful just kept looking like this. After not hearing from Aaron for a while, he finally texted again and said that Des had had an attack. We completed failed in the parent department that morning and forgot to give him his anti-seizure medicine.

So Aaron waited for Des to recover and then took both kids to the bathroom. Meantime, Old Faithful, which is supposed to go off within an interval of plus or minus 10 minutes, was 15 minutes late from her scheduled time. I waited and waited and waited some more. And then I spotted Aaron and the kids and waved wildly so they could see me. Which they totally didn’t. And then Old Faithful chose that moment to finally erupt. She had obviously been waiting for Aaron and the kids to show up. It was beautiful and impressive, but not actually my favorite thing of the day. The Artists’ Paintpots and Beryl Spring were just so cool. 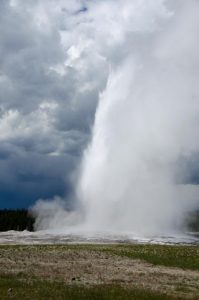 I reminded Aaron that we had extra medicine for Des, but not an oral syringe, so we walked to the clinic (which was a bit of a distance, since the whole complex is just to big), explained the situation, and got a syringe for the nurse, who looked very relieved that we weren’t asking them to administer any medicine. As we walked back to the car, it started to rain. While I had been waiting at Old Faithful, there had bit a bit of lightning and thunder in the distance. It finally caught up to us. Luckily, we didn’t have far to go when the rain started, so we missed most it, but it was a pretty impressive storm that even included a bit of hail. But then it was over and quickly as it started, and the sun came out and it was warm again, all of a sudden.

Just in time for what turned out to be my favorite stop of the day: The Grand Prismatic Spring. At first, it looks like a very beautiful but otherwise ordinary river. But then you see this flowing into it. And then we saw this weirdness. And then further on the path is this gorgeous blue-green boiling hot pool that is apparently the site of the Excelsior geyser, which went off in the late ninteen century and then again once for a few days in the 1980s. Notice the little red dot on the screen. That’s someone’s hat that must have blown off. There was a whole collection of hats lying around and in the bubbling lagoon. 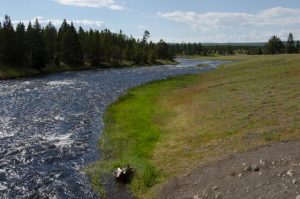 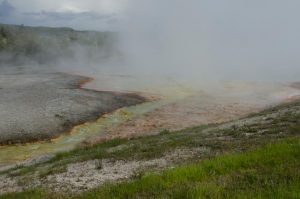 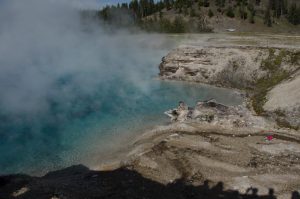 And then we walked further along the boardwalk and went squarely back into full, beautiful, alien territory. Words cannot do it justice. The story is that when the first white people who explored the area tried to tell people back East about this area, they were laughed at. “We do not print fiction!” was the reply to a memoir of one of these explorers. And I can totally believe it. Because it is something that really needs to be seen to be believed. These are just a few of my favorite photos. 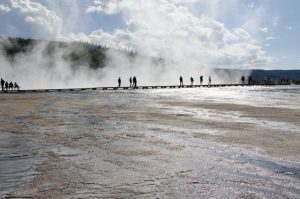 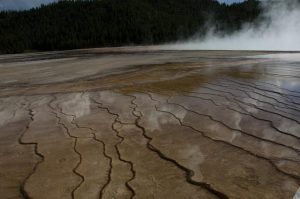 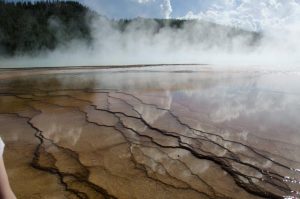 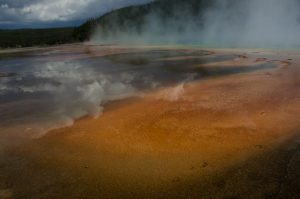 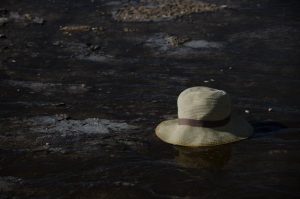 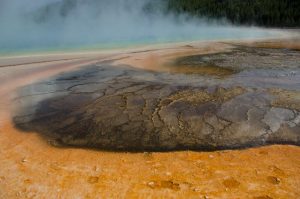 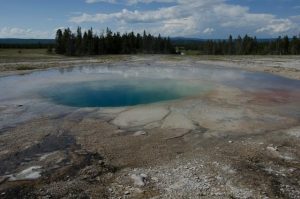 After this stop, it was starting to get late, so we called it a day and headed back to camp. When we booked this trip, I was half-expecting that Yellowstone would be somewhat overrated, but it’s really, really not. I highly recommend it… furthermore, I’d skip Old Faithful and just spend time at all the other cool stuff that is much prettier and interesting than the big geyser.

One thought on “Yellowstone Supervolcano”