We had a mysterious disappearance at Grand Teton. Somehow Gigi’s Jr Ranger passport book that she had had stamped at Glacier and Yellowstone and Colter Bay disappeared along with a couple of stickers and a magnet (also purchased at Colter Bay). Although I put it in the van right before our Colter Bay hike, we somehow lost it. So that was sad, and we spent a bit of time in the morning driving back to the Colter Bay visitor’s center (the opposite direction of where we needed to go) to see if anyone had turned it in and to buy another one when the original hadn’t shown up. So Gigi’s going to have to go back to Glacier and Yellowstone someday to get her stamps again.

After that, we took off for Utah, going first through lots of Wyoming followed by Idaho. Not a lot to say about this journey except that it was very lonely. I’m not sure if it was the particular route that Google sent us on, but the road was very empty and civilization was nowhere to be found. We’d finally left all hints of rain and coldness behind, and the weather was hot and dry and the sun relentless.

We found a playground in some small town in Idaho to regroup and have a wiggle break. Auggie found a kid about Desmond’s age to follow around on the playground and go down slides with him. He loves older kids, but is highly suspicious of kids his own size.

When we were on our way to our next campground at Box Elder, Utah, I was afraid it was going to be equally hot and dry, but the campground itself was nestled in between large trees and a little creek that ran right behind our campsite. The kids had fun scrambling down the bank to the water and walking across logs to get over the water. The water itself is shallow and unthreatening, even if they fall down in it. Basically a perfect place for kids to play. 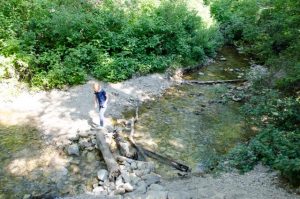 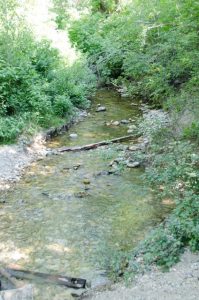 Auggie discovered a friend; another two year old who was staying at an RV at a nearby site. It turns out that his grandmother was the camp host who lives there six months out of the year. She said that she always feels bad leaving for the winter, and I can’t say I blame her. The Box Elder campground is a little bit of heaven in that dry, deserty part of Utah.

Although it’s very secluded, it’s also very close to some significant population center and thus has great data access. I used our access point to catch up on the latest episode of the Expanse. So good! And it was a great place to update this blog.