We said goodbye to Glacier on Wednesday morning and drove to Helena, MT, which is roughly halfway between Glacier and Yellowstone, our next major destination. We said goodbye to the towering Rocky mountains and drove mostly south. In the middle of nowhere, we stopped at a really nice grocery store that would have fit in nicely in SE Portland and ordered some deli sandwiches that we ate on the road. That was pretty much our only stop on the four hour drive.

Upon reaching Helena, we had a couple of goals. (1) We wanted to fix the kids bikes or get them replacement bikes, (2) We needed to do some laundry, (3) I needed to get a charger for the battery of my camera, which I had foolishly left in Portland, and it was on its last bar of power on the indicator, (4) Aaron wanted to get a crimper in case anything happened to the wiring on the trailer.

When I had first figured out our itinerary, almost nine months ago, I had looked for a campground midway between Glacier and Yellowstone, but I couldn’t find a decent one in the right area that accepted reservations. I eventually found a rustic cabin, but then I totally failed to book it in time. I was a few hours late when I tried to make the reservation, and someone had already snagged it for the day I needed it.

So I figured that this might be a good time to regroup away from the camp scene, so I booked a room at a Holiday Inn Express, which turned out to be a great idea, considering everything we needed to get done.

My first task was to find a battery charger. I first tried at Target, which was in walking distance of our hotel. Unfortunately, while they carry Nikon cameras, they didn’t stock the battery chargers separately. Next stop was Walmart, which was a couple of miles away. Luckily, they had a single universal DSLR charger in stock, which I snagged. I also took the time to go over to the bike section and found they had kids bikes for the remarkable price of $54 each. Totally crazy. Basically kids bikes are considered disposable.

I went back to the hotel and explained our situation to the manager. He recommended a used sports equipment store, which was really close to the Target. He figured they would either have bicycle wheels for the kids bikes or be able to take our bikes as trade ins, so we wouldn’t have to dumpster them. Which was the last thing I wanted to do, but I also didn’t have the space to lug two useless bikes around the country.

Unfortunately, while this place sympathized with our situation, they didn’t have the parts we needed in stock, and the only kids’ bikes they stocked were way more fancy than what our kids needed, who are only learning how to ride bikes. So we went back to Walmart and put down $108 for two kids bikes. And then Aaron took the kids back to the hotel while I found a local laundromat.

The floor at the laundromat partially flooded while I was there because apparently too many machines were using the “rinse” cycle at the same time. (As far as I can tell, that meant just my two loads since there weren’t that many people there), but otherwise everything went smoothly.

The manager at the hotel confirmed that we could use their dumpster to trash our old bikes, which killed us to even think about, but we just didn’t have a whole lot of choice in the matter, given the circumstances. However, the next morning, Aaron talked to the maintenance guy who was the one with the keys to the dumpster. It turns out that he volunteers for a place that just happens to fix up bikes for local kids who can’t afford their own. Which, if we couldn’t fix our bikes, is EXACTLY what we hoped would happen to them. So he was happy to take them off our hands, and the kids were happy to have new, cheap Walmart bikes, and we left Helena having gotten everything on our list accomplished.

I didn’t take any pictures that day, so here’s one of the Two Medicines trail at Glacier. Goodbye, Glacier! We hope to come back someday for a much longer trip! 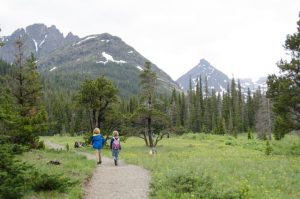