The next day, we decided to explore some of the sites that had been recommended to us by the ranger from yesterday. The first on the list was a short drive on Signal Mountain, located conveniently near our campground, that supposedly had some fantastic views of the Tetons. However, when we got to the beginning of the road, there was a sign across it, explaining that the road was closed until 4pm while they cut down some unsafe trees near the road. They didn’t want anyone to get smashed in the process.

Next on the list was the Jenny Lake Overlook. On the way, we kept stopping to take pictures because… how could we not? There was a small turnout that explained about how the hard craggy shape of the Tetons was the result of glacier activity. Unfortunately, the glaciers on the Tetons were receding and may eventually disappear due to climate change. 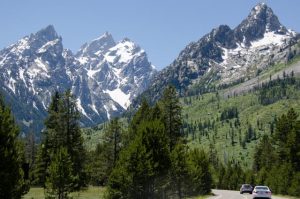 There’s a small parking lot at the Jenny Lake Overlook, but we lucked into a spot. Jenny Lake is beautiful, and the view of the Tetons above it is pretty spectacular. We look a bunch of pictures and wandered around the outlook area. Auggie had fallen asleep in the van, though, and we didn’t particularly want to wake him up, so we decided not to seek out any hikes in this area, so this turned into a pretty quick stop in our daily adventure. 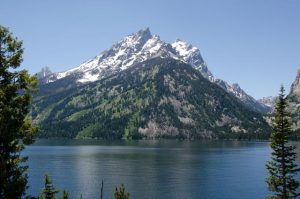 We got back in the car and finished the Jenny Lake scenic drive. As we were turning to get back to the main road, we went by the parking lot to actually go down to Jenny Lake and the hike recommended to most people not traveling with a 2 year old. It was so overflowing that people were parking out on the main road, which looked like it was a considerable distance to the action. No, thank you. I think we would have skipped that one even if we didn’t have to worry about Auggie.

Our next stop was Menor’s ferry on the Snake River, the site of an old homestead and ferry from back in the day. There are still a number of the original buildings remaining, many of them that had been built by Bill Menor himself, one room at a time. We looked through an album of at pictures from the time while a lady who worked there gave us a brief history. Apparently the man himself had a brother who built a house on the other side of the ferry, and the two of them spent many years pointedly not talking to each other. Brothers. Some things never change. 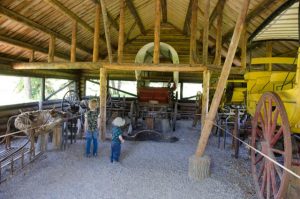 One of the old barns had a bunch of old carriages. Several of them had been used to transport people around Yellowstone before cars became popular. When the carriages were phased out at Yellowstone, they were purchased by local dude ranches who repainted them. A couple of them ended up here, still with the JY logo on them.

I don’t have a picture of it, but Bill Menor also built a storage building that he used to store vegetables with ice he cut during the winter. I’d really love to know how well that worked. The walls of the building looked pretty thick, but it does get really hot in that area. Did the ice last all summer in the storage building or just part? 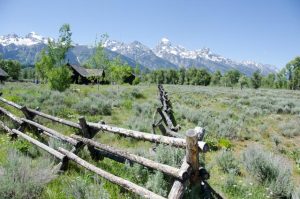 Close to the ferry is an active Episcopal church called the Church of the Transfiguration. It’s a very beautiful, small building with the outstanding attraction of a large clear window at the very front that frames the Tetons. Since the building is so dark and the Tetons are so bright, it was hard getting a good photo, but here’s my best effort. There were also benches outside pointing, of course, at the Tetons. 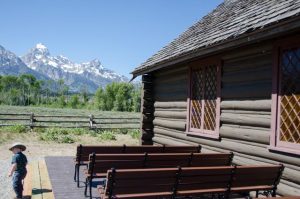 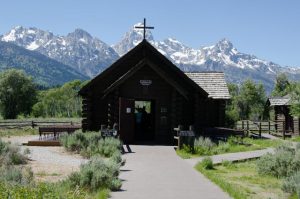 After visiting the church, we drove to the visitor’s center at Moose where we enjoyed the air conditioning on the hot day and watched a video on the Tetons which was probably very interesting, except that I had a hard time not falling asleep listening to the soft droning voice and pleasant music. 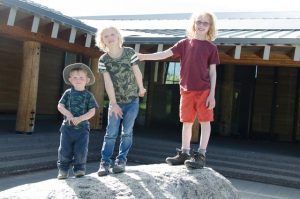 There was also this crazy history of how the Teton park came into being; Albright, superintendent of Yellowstone, invited John D Rockefeller, Jr to the area and convinced him to buy up a lot of land in the Jackson Hole valley in order to donate it to the federal government and establish a park. So Rockefeller bought up a ton of land through some agents, but then had a really hard time getting the government to actually accept the land. Grand Teton was established as a park, but without Rockefeller’s lands.

Just as today, where there’s some local opposition to expanding Bears’ Ears in Utah, a bunch of locals didn’t want Teton Park to even exist, fearing federal government interference. Rockefeller actually had to threaten to sell off the land to someone else before Roosevelt turned the area into a national monument using the Antiquities Act, which really pissed off the locals. Then after WW2, the locals realized that the national monument was bringing in a lot of tourist dollars and maybe it wasn’t such a bad thing after all. So they struck a deal with the feds, and the national monument lands were added to the Grand Teton parklands while Wyoming got an exemption from the Antiquities Act; no more national monuments in Wyoming without congressional approval.

We took a short hike to a neaby site from the vistor’s center and encountered a deer who was totally and completely unconcerned about us. 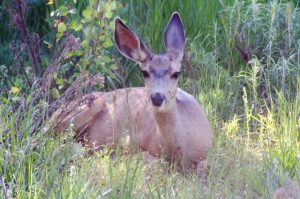 Afterwards, we loaded back into the van and headed back to Signal Mountain, making a stop at the local camp store for ice for the cooler, ice cream sandwiches for the kids, and firewood to help keep away the bugs. We didn’t know it at the time, but it was to be the last campfire for quite a while; southern Utah, our next destination, had a ban on campfires due to dry, hot conditions.